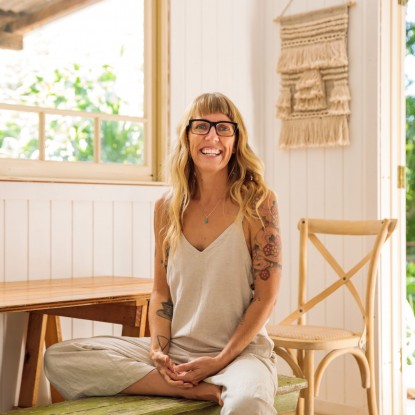 In the year 2000, when she was still known as Mel Bampton, Lissie sat down in front of a microphone at triple j and started talking to musicians about music, scientists about science and with listeners about life. In interviewing others, is where she found her place.

For 3 years she sat as host of drive along with Charlie Pickering (The Project/The Weekly) followed by three years as ‘Mel in the Morning’. During this time Lissie had the immense privilege of breaking bread with many of the Gods and monsters of modern music – Radiohead, REM, Mike Patton, Lou Reed, Blondie and Grandmaster Flash to name but a few – and behind the scenes her love for yoga kept her swimming during many heady years. The yoga to unhealthy-life-choices ratio was askew but yoga was the thread; Lissie’s lifeline.

During this time there were many highlights – once a week Dr Karl Kruszelnicki would join her and together they turned the tone from music to science. Other guests such as David Suzuki, Dava Sobel and Tim Flannery floated in too.

In 2004 Lissie started Like a Version. A segment that has become one of the most popular in triple j history, spawning a dozen compilations, enjoyed by millions and earning a place on the station’s breakfast program. – where it lives happily to this day.

In 2004, her then producer Jordy Kilby devised The Producer Series, which became her baby for 6 years on the ABC, leading to a book deal with Harper Collins based on her global search for the world’s greatest music producers. The book is complete and is due for release in October 2020. That was followed by The Album Series, in which she had the immense pleasure of taking the back off four great Australian records and finding out what made them tick.

Over the past 25 years Lissie’s affection for writing has continued to grow, with contributions to jmag, Life Etc, Surfing World, BtN, Green Living, Rage and Blunt, with articles also published in Tracks, Sydney Morning Herald, Cleo, Cosmo, The Glow, Limelight and many more. For 4 years she was the Music & Film Editor for ‘alternative mainstream’ women’s magazine, yen.

In her role as National Media Manager for Soundwave Festival for 5 years, under immensely stressful and gratifying conditions, Lissie experienced the festivals record-breaking year in 2013 as the biggest touring music festival in Australia’s history as well as survive tours with Marilyn Manson, Iron Maiden, Pennywise, Slayer, Nine Inch Nails, TOOL and hundreds more.

In 2012, with her husband, they built The Yoga Shack. This is where Lissie hosts many of her favourite events, the sacred women’s sharing space ‘Stories from the Sisterhood’, ‘Communicating with Courage’, ‘Living Hormoniously™ – Workshops for Women’ and ‘Dissolving Patterns’, a 21 day yoga therapy based program. The bulk of Lissie’s clinic work tends to fall into the categories of ‘deeply seated’ problems – cancer, autoimmune, endocrine issues, addiction, anxiety, insomnia and many other pathologies. As a writer, speaker and educator, it is always Lissie’s intent to be a steady and compassionate advocate for change.

Lissie is a fully accredited Level II Teacher as well as certified Yoga Therapist having trained with the former Director of KYM (Krishnamacharya Yoga Mandiram) and one of the world’s most experienced and recognized Yoga Therapists, Dr Natesan Chandrasekaran MD.

Lissie’s journey of yoga continues to unfold every single day, understanding that there is not a single moment in life that is not part of the practice. Constantly in practice and in study, reflecting over and over again; every decision on the mat and in life guided by the teachings of yoga through Patanjali’s Yoga Sutras and the lineage of Krishnamacharya.